August 8, 2013, By Will Ortega, Lead Teaching Artist and Professional Photographer for the Ennis Beley Photography Project

Two years have passed since the last time the Ennis Beley Photography Project served the children of Newark.  The program returned to the Marion P. Thomas Charter School this summer, where I once again had the privilege to lead the group.

This year’s group consisted of 7 girls, Anyae, Brianna, Efe, Gorgina, Lakita, Cho-Dayah and Vicky and two boys, Elijah and Yassir.  Of the nine, only one had ever photographed with a film camera. Most only used phones or point and shoot digital cameras and fewer have ever printed out their photos. Yet all distinctly recalled family members with photo albums and each understood the value of the old albums their parents or grandparents possess as family heirlooms but interestingly didn’t understand the value of their own images or the need to make prints. 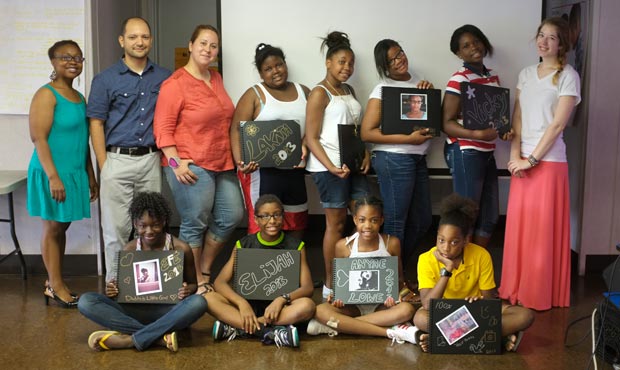 As one of my first assignments I wanted to address this paradox and allow for these children to value their pictures and to understand the reason images need to be printed and not just remain stored or shared on a computer screen or cell phone. First we introduced everyone to the early history and science of photography, requiring chemicals to create light sensitive materials, painted emulsion and glass negatives.  They then photographed one another and from these images created digital negatives (negative images printed on inkjet acetate film from their digital files).  Next each participant individually painted watercolor paper with cyanotype emulsion and used their digital negative portrait and exposed them to UV light.  The result was a unique portrait made from a combination of an early photography process with digital images.  Lastly they were then instructed to sign the image they made and exchange prints with the person that they photographed.  All received a photograph of themselves while also keeping one they made. The step by step process helped illustrate how creating a work of art can be a long procedure yet allowed for each person to understand and appreciate the time to create a print.  During our reflection period everyone valued each other’s work.

We continued the program with projects that focused on technical aspects of taking pictures, like composition and perspective but also had the group work with photographing details of their surroundings.  They were instructed to pay attention to all things, large and small, when creating images, using the camera’s “macro” option while using the donated Manfrotto tripods. They were also asked to photograph landscapes from which we created digital transfers, altering the feeling of the image. Another project required them to find an image of someone they wish they had been able to meet from their immediate family and photograph it. They would use this photograph to layer an image of themself with the relative they wished to meet and write what they would have talked about had they had the opportunity to have a conversation.

The highlight for many was the field trip to Fort Lee, NJ where we visited the Palisades Historic Park.  Here the children were able to see a unique view of the George Washington Bridge as well as the natural setting of the Palisade Cliffs and see how this area played an instrumental part during the Revolutionary War.  They photographed the bits of nature they came across, including cicada shells and a hawk that observed us from a branch above as we ate lunch outdoors.

Some children were more engaged than others throughout this entire experience, but one had a difficult time making a connection with others and couldn’t see the point of the projects. It wasn’t until the second week, when the class was taught to layer images that one student began to play and really understand the power of communication through images.  This particular student chose to layer images of a basketball, a football and cheering pom-poms.  I asked her about what motivated her to layer these together and she initially shrugged her shoulders.  I pressed on ever so slightly, and she revealed how important athletics are to her family and how that made it important to her.  Somehow her ability to talk of this personal connection validated her combination of images and allowed for her to let her guard down.  She allowed herself to try to understand her classmate’s motivations behind their projects and began to participate in our group discussions.

This program’s best asset is its writing component. In addition to making images, we stressed the significance of being able to talk about what they see in their own work as well as what others see. With poet Eloise Bruce visiting every Tuesday, the children wrote about different topics that related to their images or possible new ideas for future projects.  Though writing was initially perceived as something they don’t do in the summer, most warmed up to the idea and were disappointed when Ms. Eloise said her final good-bye.  Each student’s portfolio had a great collection of personal images balanced with their writings. 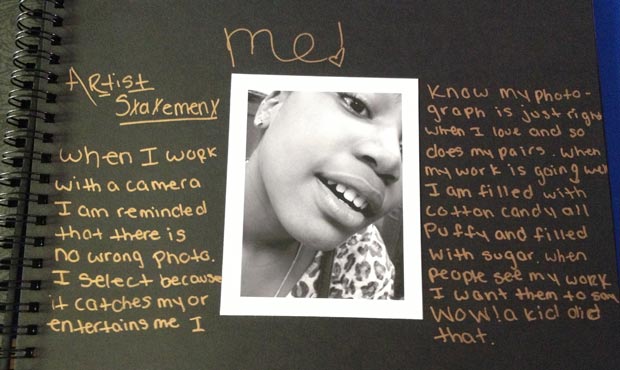 This summer the children had great energy everyday and a willingness to trust me despite our brief encounter together. They allowed for their imaginations to find new ways of perceiving their world and they found strength and pride when sharing their work with their peers and family. On the last day they excitedly shared their completed portfolio with the group. They read their artist statements and poetry and each applauded and gave supportive feedback. Ultimately, each student found a different voice this summer, a voice that can express a personal view through pictures and words, while also finding solace with one another.  I couldn’t have been more proud and I was pleased with the results from every project we completed.