MONTGOMERY – The Montgomery High School community was shocked and dismayed in 2012 when it discovered an outside wall, where school buses dropped off and picked up students, had been spray-painted with a racial slur. 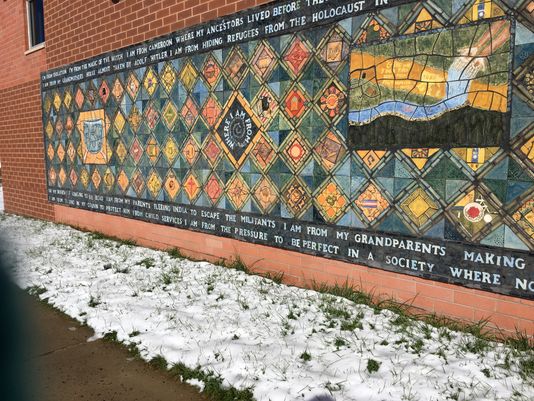 The hate message was particularly offensive because the school is a place where students go out of their way to help others, according to Adam Warshafsky, the school’s arts supervisor, and Tina Dailey, a ceramics instructor.

The buildings and grounds crew attempted to remove the paint, with only limited success, so the student council quickly erected a plywood sign painted with the word “Community” to cover up the graffiti remnants. Over time, that plywood began to warp and deteriorate.

“I always wanted to cover that spot with a ceramic mosaic, but I knew I didn’t have all the skills to bring it to fruition alone,” Dailey said.

She also knew they would need more people to produce the tiles.

Six years later, and thanks to the collaborative work of students and a professional artist, the space carries a whole new message.

Young Artists to the rescue

Eventually, Superintendent of Schools Nancy Gartenberg told Warshafsky about the Young Audiences program, and Young Audiences in turn told him about the Artists in Education program. The latter gives grants of $10,000 to schools to pay a professional artist for a residency to collaborate with the faculty and students on a specific project. Through Artists in Education, the district was able to bring in Gail Scuderi, a ceramic artist, who could help the school design and install a mosaic to permanently cover the graffiti.

The transformative work began in February of this year.

Scuderi met with teaching poet Jacob Winterstien, whom they tapped as a visiting artist for the project. He worked with students for two days to create poems using a template from the website iamfromproject.com, based on a poem by George Ella Lyon. According to its website, the I Am From Project aims to respond “to the rhetoric of xenophobia and isolationism that is becoming rampant in our country.”

Scuderi felt sure that by telling the world “where I am from” through art, the students would build a strong message of unity through diversity. Some shared where their family came from, but many more shared where their heart is. Every voice was important to create an authentic work of art.

Initially, Dailey tapped the 60 students in her three ceramics classes for this mosaic, which Scuderi envisioned as a mural that would be built like a quilt. Its shapes are unified by geometric repetition and through color themes, but every tile is individual in its own message.

The project expanded beyond those students to include a middle school ceramics class, faculty and administrators. Members of the community also got involved during Montgomery’s annual community arts night, making some of the tiles that went between the squares. 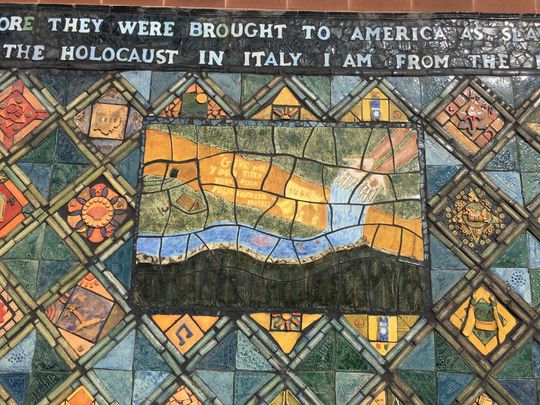 This is one of the “windows” that break up the field of diamonds to make a strong statement in the Montgomery High School Mural. (Photo: Pamela MacKenzie/staff photo)

The squares of the high school students were glazed in warm colors, while the tiles designed by others were glazed in cool colors. And to break up the field of square diamonds throughout the mural, the students created some “windows” — one of a global melting pot and one themed with the words, “Give me your tired and your poor, your huddled masses.”

Dailey pointed out the diversity embraced in the design. She said one student square depicts his family’s work for NASA, another depicts their Christian faith, another is about baseball. But brought together, there is unity in the diversity.

“The one comment I heard over and over from students was they couldn’t believe that such beauty could come out of something so ugly, meaning the graffiti,” Dailey said.

In ArtBeat magazine, Scuderi wrote, “During the dedication, several students spoke to the assembled crowd. I was truly amazed and touched by the way that they were able to speak about their experience of working on this project. The ability of the students to dig deep within themselves, to create a work of art that is truly authentic and meaningful, is the most validating measure of success I have yet to experience in my residency work.”

Assemblyman Roy Frieman (D-16th District) who attended the dedication in June, said the mural is one of the most beautiful things he has ever seen.

“I came home from the dedication and told my wife, ‘I have the best job in the world’ to be able to attend things like that,” Frieman said.