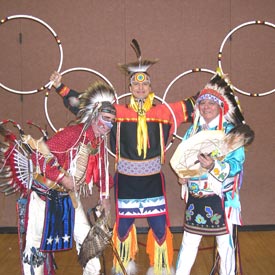 "Art is a nation's most precious heritage. For it is in our works of art that we reveal ourselves and to others the inner vision which guides us as a nation."

- Lyndon Johnson, on signing into existence the National Endowment on the Arts

Thunderbird American Indian Dancers, officially incorporated in 1963, traces its roots further back, to a group of teenagers called the Little Eagles. From the beginning, keenly aware of the great diversity of tribal groups living in and around the metropolitan area — each with a very distinct cultural background — its members were determined to learn and preserve the songs and dances of their own tribes, then to branch out and include other tribes. Their teachers were their mothers, fathers, aunts, uncles, and cousins. Since its formation, Louis Mofsie and the Thunderbird American Indian Dancers have visited and performed in almost all fifty states, and have learned from a wide variety of Indian peoples.

In addition to dancing and singing, the Thunderbird Indian Dancers’ activities include the Native American Craft Workshop, Indian Studies programs for Indian youth, Cherokee language classes, and the Thunderbird American Indian Dancer’s Scholarship Fund for Indian students. The company also presents an annual season at the Theatre for New City in Manhattan, and has produced an album of songs.

The Thunderbird American Indian Dancers take great pride in sponsoring the only monthly Pow-Wow in New York City, which has been held continuously since November, 1963 at the 23rd Street YMCA in Manhattan. 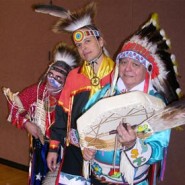