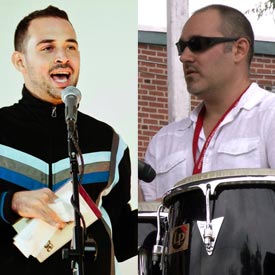 "Music expresses that which cannot be said and on which it is impossible to be silent.

Josh Robinson grew up around the music business and began playing pots, pans, and eventually drums in his basement at an early age in his hometown of Woodstock, NY. In 1989 he joined “Sankofa” Afro-Brazilian drum and dance ensemble, where he was introduced to the instruments and rhythms of Latin/Caribbean music. The rhythmic quest has taken him to countries such as Cuba, Brazil, and Panama, where he has studied with masters of percussion with a strong focus on conga drums. He studied at AMLA (Asociacion de Musicos Latinoamericanos) in Philadelphia, and has attended workshops and clinics led by masters such as Giovanni Hidalgo, Candido Camero, Zakir Hussein, Orlando Fiol, and Yaroldy Abreu Robles. He founded “Rhythms & Roots” Latin Music ensemble in 2000 with wife Giovana, and both were selected to the 2003 & 2004 Philadelphia Music Project’s Latin Orchestra, led by famed bandleader Johnny Pacheco. He performs on the Philly scene with poets, DJ’s, jazz groups, theatre/dance groups, and on a variety of other projects as hired “hands.” He attended the ATI (Artist Teacher Institute) through Arts Horizons at Rutgers University and has since been working with kids ages 5 to 85, leading workshops, residencies, professional development, school assembles, and after-school programs, where he has used percussion as a tool for teaching aspects of communication, teamwork, creativity, leadership, discipline, and cultural awareness through music and instrument making. He is a New Jersey State Council on the Arts teaching artist for their Artist in Education programs.

Jacob Winterstein’s poetic journey started when he was a high school student. He was an activist that spoke about improving Philadelphia’s schools at rallies, city council hearings, and school board meetings. He was also a peer educator who was known for using humor to share information about living healthy lives with his peers. He also liked freestyling (improvisational rap) with his friends.

In 2005, Jacob studied poetry as performance at Temple University under the tutelage of Dr. Kimmika Williams-Witherspoon. Dr. Williams-Witherspoon helped him fuse his political beliefs, humor, observations, love of rhyme, and attention-seeking skills into performance poetry. Jacob has been writing, performing, and teaching poetry ever since. He has represented Philadelphia at the National Poetry Slam and the Individual World Poetry slam. He has performed and taught in Europe, Africa, and across the U.S. in community centers, schools, prisons, universities, and after school-programs.

The performers were excited about their art and clearly enjoyed being with our kids, playing, talking, and making music for us. Ultimate pros. 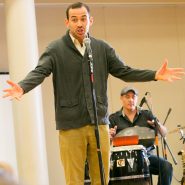