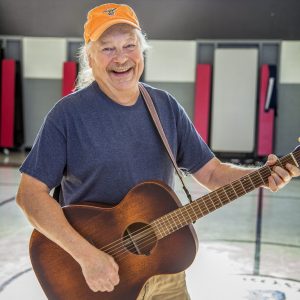 I aim to engage students in critical thinking through the arts, and, in particular, folk and rock & roll music. By actively singing, moving, and dancing and using other higher-order intelligences, the folk musician and the audience can create a larger sense of community and awareness of our place in our history and culture. And it is a whole lot of fun in the process.

Folksinger, coffee-house impresario, D.J., music educator, guitar and mandolin virtuoso—if it has anything to do with folk music, Dave Fry’s been there, done that. After nearly 40 years of performing solo and with bands, in clubs and schools, at folk festivals and the White House, in Mexico and Germany, his contagious love of music hasn’t lessened a bit. Dave’s I Like Peanut Butter CD won Best Re-Release from the Children’s Music Web in 1999; earlier, he received an award for best Children’s Programming in PA for his RockRoots program on PBS. The New Jersey Council on the Arts has named him a Master Artist for his work in schools.

Fry is so flexible, funny, and fluid, it’s easy to overlook his tricky craft, the joy of making music.

Some say folk music, some say theater, some dare say rock and roll, but it’s all a part of what Dave does so well—"play" music. 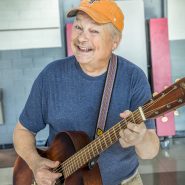