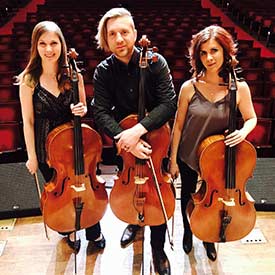 Connecting with children and sharing the joys of music with the next generation continues to be an important aspect of our musical career. Having started the study of the cello in public elementary school strings programs, we value the importance of arts education and strive to give back to the community.

A cello rock powerhouse featuring three cellists and a drummer, Cello Fury’s original music combines the symphonic sounds of the cello with driving rock beats. Cello Fury’s cinematic, progressive rock sound appeals to a diverse audience throughout the United States and abroad, with over 100 performances yearly in venues ranging from concert halls to rock clubs. Founding members Nicole Myers and Simon Cummings, who also composes for the band, were joined by cellist Cecilia Caughman in 2018.  Drummer David Throckmorton has performed with the group since its start in 2009.  Cello Fury has performed on radio and television, in rock clubs, concert halls, and music festivals such as SXSW, for audiences as large as 67,000, and has toured throughout 27 states and abroad. As an independent band, Cello Fury has released two albums of original music. Connecting with artists across genres, Cello Fury has collaborated with dance companies, theater organizations, opera companies, and orchestras, as well as with rock bands and singer-songwriters.

In addition to an active performance and touring schedule, the band focuses on inspiring young musicians and giving back to the community. Each year, Cello Fury performs for thousands of young people throughout the mid-Atlantic states. In the 2015 to 2016 school year alone, Cello Fury reached approximately 20,000 children through over 60 outreach concerts across six states. Each summer, Cello Fury leads four weeks of an alternative strings camps for aspiring musicians. Cello Fury has also taught hundreds of students through the Pittsburgh Public School’s “Summer Dreamers” camp.

The music made my heart sing! 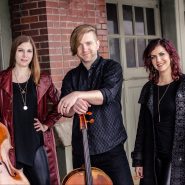 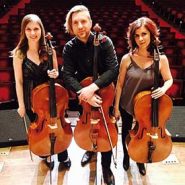