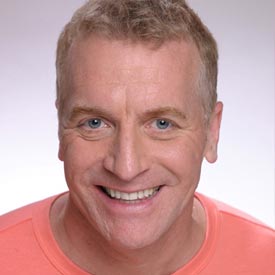 "I have been a mime all my life, long before I even knew there was a thing known as "mime."

I have always been drawn to silence, and how we can communicate without words. Children are born to be mimes, and we all need to be reminded how much can be said without saying a word."

As an actor, mime and educator, Bill Bowers has traveled throughout all 50 the United States and Europe. His original mime show UNDER A MONTANA MOON premiered Off Broadway at Urban Stages to critical raves, and since that time he has performed the show throughout the world

In recent years he has performed UNDER A MONTANA MOON in Italy, Romania, Macedonia, Japan, and Norway.

Committed to introducing MIME to new audiences, Bill has taken UNDER A MONTANA MOON all over the U.S, visiting such disparate settings as one room schools in Montana and Nebraska , Amish Colonies, the Flathead Indian Reservation, Homeless shelters in New Jersey, as well as The Kennedy Center in DC, and Chicago’s Steppenwolf Theater.

Margo Jefferson of the The NEW YORK TIMES writes, “To watch Bill Bowers’ UNDER A MONTANA MOON, is to see the technical elements of a style that brings Marcel Marceau readily to mind, joined to the American West. Mime can be wonderful – the air between him and us was his palette.”

Bill has been hailed by critics as “a great American mime”, winning the Dallas Ft Worth Critics Award, Best of the Berkshires, Best Performance in the International United Solo Festival and International Fresh Fruit Festival.

He is featured in the film TWO WEEKS NOTICE, and on television in Disney’s OUT OF THE BOX, REMEMBER W.E.N.N., ONE LIFE TO LIVE, and ALL MY CHILDREN.

Bill holds an MFA from Rutgers University’s Mason Gross School of the Arts, and an Honorary PhD from his alma mater, Rocky Mountain College.

In 2008 he was named Artist of Eminence at the University of Wyoming and created a new theater piece entitled HEYOKAH while in residence in Laramie. HEYOKAH is now being produced at the Manitou Art Theatre in Colorado, and will also have productions in NYC and the Edinburgh Festival this season.

He presently teaches at the Neighborhood Playhouse and NewYork University, and is a teaching artist for Urban Stages and the Paper Mill Playhouse He regularly presents workshops and master classes, and has studied with the legendary Marcel Marceau.