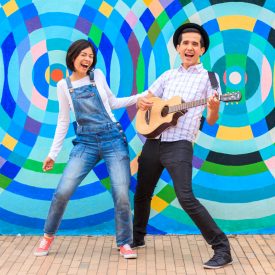 We believe music can be a powerful tool to encourage empathy toward others and pride in one’s own culture. All children benefit from learning to be culturally aware, to appreciate the differences among us, and to acknowledge the diversity within other cultures. For Latino children it’s especially important to have opportunities to see positive role models who look like them and to experience programming that celebrates their language and background.

Our program incorporates Spanish words and showcases different Latin sounds while emphasizing multiculturalism and encouraging children to be respectfully inquisitive about others and where they come from.

123 Andrés, the Latin Grammy-winning husband-wife team of Andrés and Christina, has performed for student and family audiences across the US and in Puerto Rico, Panama, Mexico, and Colombia.

Andrés grew up in Bogotá, Colombia, and learned how to play the guitar from his father as a child. He studied clarinet at the Conservatory and went on to earn a Doctorate in music. Christina was raised in the US, in a Spanish-speaking family hailing from Colombia. After serving as a public school teacher with the School District of Philadelphia, she found her mission teaching through music.

123 Andrés magically engages students of all ages and languages to sing and dance in an interactive and supportive environment while also teaching them about culture and the world around them. 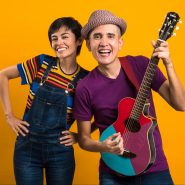