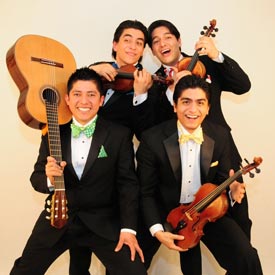 Though we believe music education should be part of an integral program in schools and institutions around the world, we recognize that children and young performers often do not have access to high-quality and culturally diverse music programming. Therefore, we are committed to offering live concerts and interactive presentations for children and adults. We believe these presentations are one of the best ways to create an open dialogue with audiences about our music. Through our work, we seek to teach audiences of all ages, about how we work together as a family, the importance of social activism in music, the rich tradition of music making in Mexico, and the role of the artist in modern society.

The Villalobos Brothers were born and raised in Xalapa, Veracruz, Mexico. They spent their childhood listening to their grandmother Cristina Vásquez sing and play guitar and accordion after a day’s work. They took up the violin as children and soon learned to sing and play other instruments, including guitar and piano.

They have been acclaimed as one of today’s leading Contemporary Mexican ensembles. Their original compositions and arrangements masterfully blend and celebrate the richness of Mexican folk music with the intricate harmonies of jazz and classical music. The Villalobos Brothers deliver an intoxicating brew of brilliance, cadence and virtuosity that awaken the senses and mesmerize the listener.

In 2013 they performed at Cumbre Tajin, one of the most important music festivals in Latin America, where they shared the stage with Regina Spector, Pet Shop Boys and Los Tigres del Norte. Later that year, they became the Ultimate winners of the “2013 Battle of the Boroughs”, one of National Public Radio’s flagship competitions sponsored by The Jerome L. Greene Performance Space, WNYC and WQXR’s in New York City.

They were the first Mexican band ever to play at the Apollo Theater in Harlem, NYC, as featured guest artists, adding this historic venue to an already impressive list of credits that includes the Latin Grammy Awards, Carnegie Hall, the Guggenheim Museum, Lincoln Center, the Metropolitan Museum of Art, the 60th Anniversary of the United Nations, Rockefeller Center, the New York Mets field at Shea Stadium, John F. Kennedy Center for the Performing Arts, New Victory Theatre in Broadway, The Miller Stage in Milwaukee, The Ford Theatres in Hollywood, and Teatro Amadeo Roldán in Havana.

In February 2014 they performed for the first time in Asia for more than 3,000 IIT students at the opening night of Alcheringa Atlantis, the largest music festival in North East India. During the summer they toured the United States with concerts in California, New Jersey, Vermont, New York, Connecticut, Wisconsin, Texas, and were invited to perform in Moscow, Russia, as special guests during the Mexican Independence Day celebration.

THANK YOU Young Audiences for giving us a magic morning with the Villalobos Brothers!!...  we had two assemblies and their energy was fantastic! As I watched the faces of our all of our 400 students each and every one was mesmerized by the performances. Even the teachers!