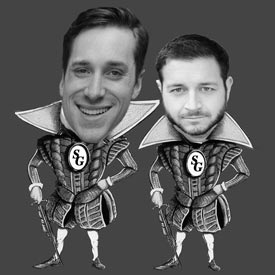 ""Art is a nation's most precious heritage. For it is in our works of art that we reveal ourselves and to others the inner vision which guides us as a nation."

-Lyndon Johnson, on signing into existence the National Endowment on the Arts

Created by Richard McElvain and David Zucker.  Richard has been active in the New England theatre scene for more than a quarter of a century. Arguably one of Boston’s finest actors, he has also directed many critically acclaimed productions for regional theater companies. His on-screen credits include Mr. Crain in the film “Mermaids” and several episodes of the television series “Spencer for Hire.” A professional actor, director, playwright, teacher, and mime, David was Young Audience’s National Artist of the Year in 1996—perhaps the only such honoree to hold a 6th degree black belt in the martial art of Shim Gum Do! He is the author of two original plays and the children’s book, “Uncle Carmello,” and has performed throughout the United States, Great Britain, and Greece. David has an MFA degree in acting from Brandeis University, and teaches Tai Chi in addition to practicing his Zen swordsmanship.