I believe in the power of words and in the power of story to inform and transform. As an artist and former educator, I believe in children and in their innate capacity to engage with, to be touched, stimulated, excited, and even transformed by, multiple forms of creative human expression—The Arts. I believe in the importance and the impact of shared arts experiences. I also believe in the importance of keeping alive and sharing diverse cultural traditions. When children can see themselves through the artist, through the stories or songs, through the characters’ strengths, weaknesses, failings, and triumphs; their humanity, their gifts and their human experience are validated. Regardless of our ethnic origins, through the arts, we become not strangers, but friends.

I have walked the path of an African American Storyteller for over 20 years. The journey has led me to Senegal, Gambia, Ghana, and South Africa, where I heard age-old stories—still being told or being revived. It led me to study the beautiful harp-like 21-string kora, the instrument of the griots or jalis of Senegal, Guinea, and Mali. My heart is touched each time I hear or share what I have learned. I know your children’s hearts will be touched as well.

Charlotte Blake Alston performs in venues throughout North America and abroad. Venues are wide and include the John F. Kennedy Center for the Performing Arts, the Smithsonian Institution, the Kimmel Center, the Women of the World Festival in Cape Town, South Africa, prisons, detention centers, and a refugee camp in northern Senegal.

She breathes life into traditional and contemporary stories from African and African American oral and cultural traditions. Her solo performances are often enhanced with traditional instruments such as djembe, mbira, shekere, or the 21-stringed kora. In 1999, Charlotte began studying the kora and the West African history-telling traditions of Senegal, Mali, Guinea, and Guinea Bissau. Her teacher was the highly respected Senegalese griot (jali), the late Djimo Kouyate. She has recently resumed her studies with Malian virtuoso Yacouba Sissoko.

She brings her stories and songs to national and regional festivals, schools, universities, museums, libraries, and performing arts centers throughout the United States and Canada, as well as local and national radio and television. Her repertoire is wide and programs are adapted to any grade level or age group.

In 1991, Charlotte became the first storyteller to perform with the Philadelphia Orchestra on both their Family and Student concert series. Since 1994, she has been the host of “Sound All Around,” the orchestra’s preschool concert series, and continues to appear as a guest host and narrator on family concerts. For six seasons, Charlotte hosted “Carnegie Kids,” Carnegie Hall’s preschool concert series, and has been a featured artist on the Carnegie Hall Family Concert Series in NY since 1996. She has been a featured teller at the National Storytelling Festival, the National Festival of Black Storytelling, and at regional festivals throughout North America and abroad. She has been a featured artist at both the Presidential Inaugural Festivities in Washington, DC, and the Pennsylvania Gubernatorial Children’s Inaugural Celebrations in Harrisburg, PA. In 2016, she was one of two storytellers from across the country invited to perform at the historic opening weekend opening of the Smithsonian Institute’s new National Museum of African American History and Culture.

She has been a featured narrator for several orchestras and conductors including the Philadelphia Orchestra, the Orchestra of St. Luke’s, the Cleveland Orchestra, the Saint Louis Symphony, the Orpheus Chamber Ensemble, and the Baltimore Symphony Orchestra. She represented Carnegie Hall in 2003 when she hosted a series of concerts in Miyazaki, Japan, with the Eddie Arron String Quartet and fellow storyteller, Motoko. Currently, she performs as both pre-concert artist and host of Carnegie Hall’s Family and Education Concert Series. In addition, she previously served as a host for Carnegie Hall’s Community Sing-Ins. Charlotte’s narrative voice can be heard on documentaries including Plenty of Good Women Dancers, The Peddie School, and Crosstown. In the PBS documentary Safe Harbor, producers proclaim her “strong, steady voice is like a lantern in the darkness.” She has narrated two shows at the Franklin Institute’s Fels Planetarium: Under African Skies and Stars of Wonder. She herself was featured in the award-winning documentary Family Name, which aired around the country on PBS. Kinocraft Media Productions converted her “Martin Luther King Storypoem” to video format for educational distribution. She is the narrative voice for a series of training videos produced by Global Media Health

Ms. Alston has produced several commissioned works for orchestras and opera companies, including original narrative texts for Carnival of the Animals and Scheherazade. More recently she has been engaged as a librettist for the Philadelphia Orchestra and the Commonwealth Youthchoirs for Kabo Omowale: Welcome Home Child with composer Andrea Clearfield and The Good Raised Up with composer John Blake, Jr. She was commissioned by the Huntingdon County Arts Council to craft and tell the story of the African American community of Mount Union, Pennsylvania, which included a residency and performances for school and public audiences.

Charlotte has received numerous honors, including the prestigious Pew Fellowship in the Arts. She was selected as Philadelphia Magazine’s “Best of Philly” and was the recipient of the Commonwealth of Pennsylvania Artist of the Year Award (the Hazlett Memorial Award), which recognizes individual artists “for excellence in the Commonwealth.” She holds two honorary PhDs and received the Circle of Excellence Award from the National Storytelling Association.

Charlotte was one of four Americans selected to perform and present at the first International Storytelling Field Conference in Ghana and was a featured artist at the Second International Festival in Cape Town, South Africa. In the summer of 2005, she was the sole American selected to perform on a main stage at the STIMMEN: Voices Festival in Basel, Switzerland, and at the Cape Clear Island Festival in Ireland. In 1996, she was the Director of “In the Tradition…,” the 14th National Festival of Black Storytelling. She is a recipient of the Zora Neale Hurston Award, the highest award bestowed by the National Association of Black Storytellers.

Charlotte was wonderful! All of our students were mesmerized! 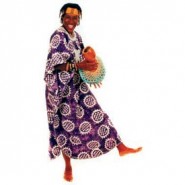 Stories and Songs in the African Oral Tradition